Back in the mid-90's I had a fish store in Duluth, Minnesota and also maintained my own hobby tanks. Being a retailer, I had access to many/most of the wholesalers around the country.

One supplier that I used occasionally was Aquarium Seasons out of California. Most of their stock (maybe all?) came from Asia. One day they had some Mudskippers on their availability list. I knew a little bit about them, but not much. I decided that I needed to buy some to see what they were all about. I never sold these in my store, just kept them for myself.

I had them for a few years, and still have fond memories of keeping them. Probably fonder memories than they would have if they were still alive. I tried to give them a good home, but I'm sure that it was far inferior to their natural environments. 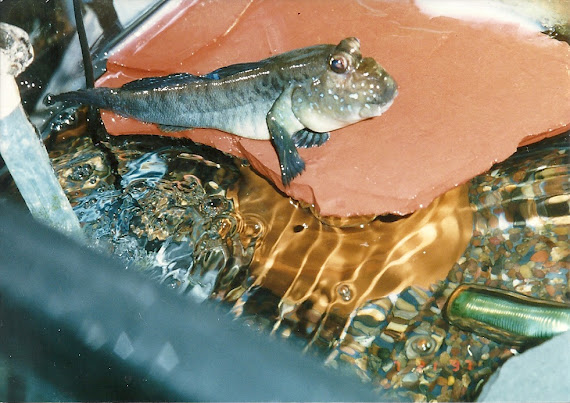 In the photo above, you see one of the skippers basking on a piece of slate. I could only find four photos, although I'm sure there are more somewhere. These photos were taken when I first set up their initial tank, a 20 gallon long (30" long by 1 foot by 1 foot).

I didn't keep them in this small tank for very long. I had two 120-gallon 4-foot tanks (still have them, but not for much longer) and it took me a little while to convert one of these big tanks from a fish and plant habitat into a Mudskipper habitat.

In the 20-long tank, the water level was at about 4 inches. There were three different slate platforms where they could hang out when wanting to be out of the water.  There was also a ramp made of slate that would help them get up to a platform, although I don't think they really needed the ramp. You can see one of them on the ramp below. 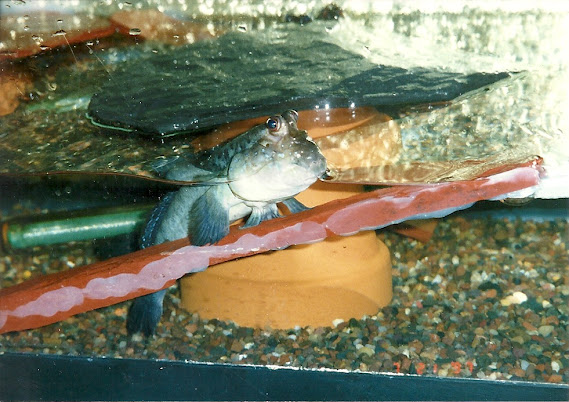 I had a thin layer of gravel at the bottom. Later in my big tank I kept the bottom clear without any gravel (more about that later). I also had an internal Penn Plax power filter that had an up-spout to create a bit of a of a fountain effect. You can see it a bit better in the next photo. 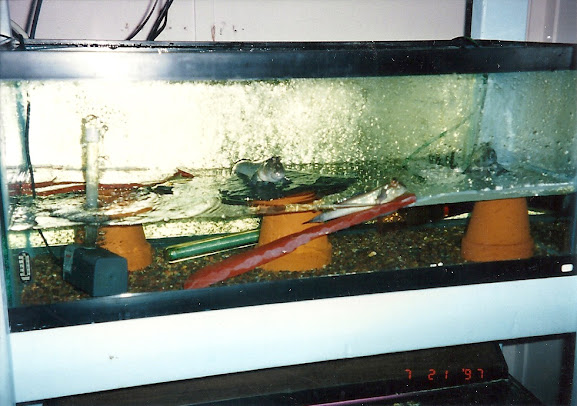 I also took the photo below of one of the Mudskippers out of the tank. 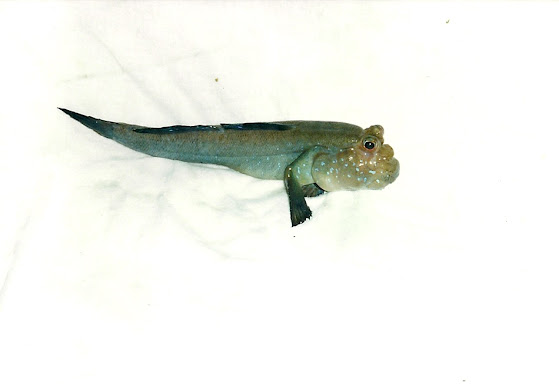 Sadly, none of these photos show a skipper with a raised dorsal fin, which is usually a sign of aggression or ardor. They look very cool with dorsal fin erect.

For food I mainly used live Blackworms, live earthworms (small ones), and dead flies and bugs. I've heard that they will eat some dried fish food, pellets, and wafers; but I don't recall feeding them those things. But I'm old now, and my memory is not to be relied upon. They would eat their food on the platforms that I provided.

I had a total of four Skippers. That's too many for the small 20 gallon long tank, but was great for the 120-gallon tank. I wish I could find some of the photos that I know I took of the larger tank. I used silicone and large pieces of slate to create a couple of terraces in the back corners of the tank. Rather than use slate for the platforms, I filled up the terraces with gravel for the Skippers to get out of the water. This would have been a great deal of gravel - so each one had filler items below the surface of the gravel - such as large clay pots to take up space and not use tons of gravel.

I also built another platform just by piling up a bunch of rocks and slate pieces. The water level was kept around 10 inches in the 24-inch high tank. They can jump!

I know I kept their water slightly brackish, but I don't recall fretting about this very much. They never seemed to have any issues with the water quality, temperature, pH, or saltiness.

I'm not an artist, but I've attempted to draw the plan for the 120-gallon Mudskipper habitat that I used for several years. This is a top view, so you're looking down on the terraced platforms that I built for them. 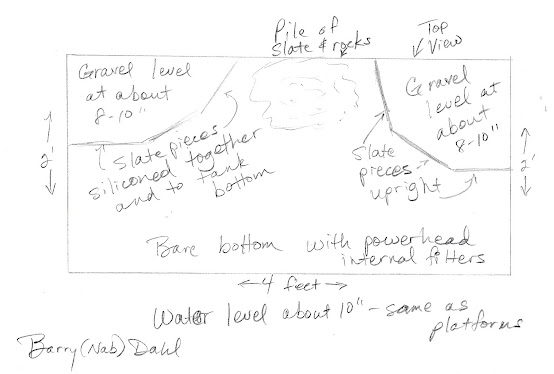 I've never had another chance to buy Mudskippers. Not even on Aquabid when I used to check that site relentlessly. Now as I'm retiring from the hobby (a 7-month snowbird has a hard time keeping his tanks going while away) I'll likely never enjoy the Skippers again. I hope some of you reading this will one day get to enjoy these animals.

Looking for a new racket (or racquet) for Fall 2022? I'll post some of the good deals I see on rackets that I recommend. About the Racqu...